Unruly Hoskinson | Why was he kicked out of Ethereum?

You may not know it, but things were very heated in the Ethereum camp in 2014. It’s by no means about the fact that two years later The DAO was about to be attacked but about the attitude Ethereum’s co-founders had towards each other and the decision Vitalik Buterinmade…

“Where the cooks’ eight …

The first followers of Ethereum united under one common banner, which symbolized the admiration and devotion to the idea that Vitalik Buterin presented in the manifesto of the later, the world’s largest altcoin. They seemed to be united by something else: contempt for how limited Bitcoin was:

“Bitcoin sucks at developing a financial system, it’s really terrible,” Mathias Grønnebæk, an early developer of Ethereum, was to say.

As a result of the above, and several other messages, Ethereum’s eight co-founders failed to keep the team together and eventually split. The one who headed this personal “fork” was Charles Hoskinson, later the creator of Cardano.

To understand the early history of Ethereum, you would have to look into the head of Vitalik Buterin. It is important to remember that Vitalik created the second largest cryptocurrency in terms of market capitalization when he was just 19 years old. He did this before he could even legally buy himself a drink in the US.

Undoubtedly, Vitalik had the technical skills and uncompromising vision to create Ethereum. However, he lacked leadership skills. He also had trouble making tough decisions and was altruistic to the point of exaggeration. He never stomped his foot, and as a result, he let some boiling egos get out of control.

Many developers had their own vision for Ethereum that didn’t align with Buterin’s core project goals. Eventually, things started going wrong as Buterin wanted, and it led to a desperate power struggle.

Vitalik had to choose who he would keep with him.

The battle for the apostolarium at Vitalik

According to Matthew Leising’s acclaimed book Out of the Ether, these were the major Ethereum players at the time.

Anthony Di Iorio – One of the most important investors in the early history of Ethereum. He was the one who introduced Vitalik Buterin to the cryptocurrency community. He also pledged Charles Hoskinson to the ETH team.

Charles Hoskinson – creator of Cardano. Charles wanted to lead the project from the beginning, calling himself the CEO of Ethereum. He loves Steve Jobs and is known to act in a similar tone to him.

Gavin Wood – Ethereum’s chief architect and one of the most important developers in the history of cryptocurrencies. He took Vitalik’s vision and made it a reality.

Joe Lubin – founder of ConsenSys, the best Ethereum software engineering application. He always seemed to stay away from any internal drama.

Amir Chetrit – met Vitalik in Israel when they were working on an early version of Ethereum.

Vitalik Buterin – everything you might want to know about him that you don’t already know, you can read here:

“Many people have called themselves co-founders of this project ,” said Michael Perklin, an early ETH investor. “In my opinion, there is only one Ethereum founder: the guy who came up with the idea – and he deserves all the credit.”

All of the co-founders – with the exception of Vitalik – felt insecure on the team for one reason or another. Gavin Wood only met eye to eye with the programmers and actually had no respect for anyone else.

Amir Chetrit lost his passion for Ethereum and showed up at meetings wearing the t-shirts of other cryptocurrency projects. Vitalik once said of Amir: “Half the time he talked us into the coins he was currently working on. I’m not sure what to think of this character.”

However, no one was as problematic as Charles Hoskinson…

In “Out of the Ether,” Charles is described by the other co-founders of Ethereum as a pathological liar, a sociopath and someone who doesn’t trust anyone

According to what Joe Lubin recounted, Hoskinson tried to convince people that he was Satoshi Nakamoto, and even showed emails claiming to have created Bitcoin.

More far-fetched stories assumed that Charles attributed his limp as the result of a failed jump from an Apache helicopter in Afghanistan; or that he was associated with DARPA, the super-secret US government weapons agency.

During a period of collaboration, Charles was said to have stopped meeting Vitalik alone, claiming: “Vitalik is a kind of communist. He’s not a capitalist.”

The night that changed everything

“I’m not convinced that Charles doesn’t have sociopathic tendencies,” confessed ETH co-founder Taylor Gerring. “Why would you want to give the impression that you’re Satoshi Nakamoto? That you jumped out of a Blackhawk helicopter? Why?”

Interestingly, Ethereum’s first transaction on the blockchain was between Gavin Wood and Charles Hoskinson. The two later became the founders of the most successful Ethereum “killers”: Polkadot and Cardano.

Gavin gave Vitalik an ultimatum: either Charles or me.

At that stage of Ethereum development, Wood was too important and Hoskinson too toxic. So on May 28 at a mansion in Zug, Switzerland – also known as “Crypto-valley” – Vitalik made an important decision in the presence of all the ETH co-founders.

A somber tone persisted in the air. All the beer and pizza that was usually scattered around the house was cleaned up. Each member of the team was allowed to speak his mind. Later, Vitalik spent some time alone with himself on the balcony to think things over.

“I gave this speech, which consisted of a half-minute filler,” Vitalik said, “after which I made the real decision that Charles and Amir would be fired. They were disappointed, but they weren’t completely surprised either.”

Years later, Anthony Di Lorio was also fired, although it also practically happened on the same night that Charles and Amir were kicked off the team.

Charles later commented on his departure in the following words: “it took place in a bit of a ‘Lord of Flies’ style – a situation where camps of power were formed and the winner was the one who was most able to influence Vitalik. That’s why there’s some bad blood, that’s why I wasn’t the nicest guy when I left. There wasn’t an air of happiness from my posts on Reddit.”

Who is Charles Hoskinson?

Today, Charles is one of the most idiosyncratic personalities in the cryptocurrency space. He is active on social media, hosts weekly interactive live broadcasts, beams with elation and happiness

Is there still some bad blood left between Charles and Vitalik? 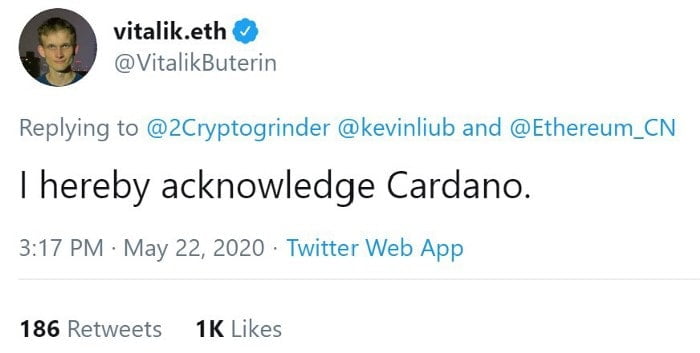 Since his departure from ETH, Hoskinson has accumulated several more or less significant “antics” on his account. One of the most infamous is a pompous tweet directed at Metamask

, one of the most popular Ethereum wallets.

After the tool’s developers advised Hoskinson to contact [email protected] in March this year, he replied: “You’re telling the CEO of iohk, the founder of Cardano and Ethereum, to use support?”

You’re telling the CEO of IOHK, founder of Cardano and Ethereum to use the support email? Just wanted to ask about the chrome delisting.

s not hard to guess that his pretentious tone didn’t get much appreciation from the community.

What is Charles Hoskinson really like? Could his temper reflect on Cardano’s future?

Ethereum and its revolution on the brink of disaster? 58% of smart contracts subject to a very nasty flaw