Socios.com sponsors Inter: only the official announcement is missing! 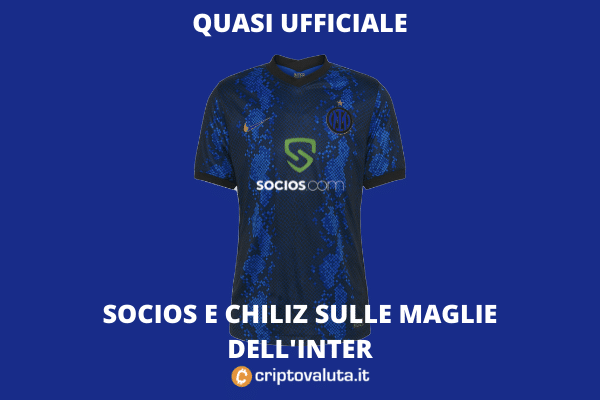 It seems that now we are in the home stretch. The issue that had kept on their toes both the Nerazzurri fans, as well as fans of cryptocurrency, should end with a happy ending. According to several sites that follow very closely the developments of the Inter universe, Socios.com – brand of reference of Chiliz – and the team of Milan have now defined the details of the agreement.

It will be Socios.com, a platform at the intersection of professional sports and the world of cryptocurrency – to make its presence on the front of the uniform of the team that was Moratti’s and that won the Scudetto last season.

This is incredible news for all those who have already invested in this token – and more generally for cryptocurrency enthusiasts, with the collaboration between Chiliz and big teams taking an unexpected but very welcome turn.

We’ll be able to take advantage of this news by investing in Chiliz via the Capital.com platform (here to get the always free and unlimited demo account), which offers CHZ within its list of 235+ cryptocurrencies, on which we can trade with artificial intelligence or by resorting to professional services such as MetaTrader 4 and TradingView. When we want to switch to a real account, all we have to do is pay the minimum of 20 euros, one of the lowest in the world.

Agreement finalized, we expect the announcement in a few days at the latest

The issue had been going on for a few days now, with a bounce of rumors, denials, arguments behind the scenes and an agreement that seemed to jump at any moment. And instead the offer of Socios.com seems to have been irresistible for the Inter management. The offer, according to rumors, would be about 20 million euros per season, with bonuses that will be linked to both the sporting results that the Nerazzurri club will be able to achieve, and to staggered involvement of fans in the world of cryptocurrency.

We would like to remind our readers that Chiliz and Socios.com offer clubs the famous fan tokens, cryptocurrencies for fans that allow them to participate in votes on their team or access exclusive offers. With the network already powering several initiatives for other Italian clubs, such as Roma – who have chosen Socios.com to vote on their next bus – and Juventus, who have already carried out initiatives on the field to promote their fan token.

With Zhang’s Inter getting ready for its tour of the United States, Socios.com could make an appearance among the shirts soon, filling the space that was left empty during the presentation of the new uniforms.

This of course, provided that the agreement with Chiliz goes through, which seems to be just around the corner – at least according to the well-informed. It’s been a great summer for CHZ and Socios.com, who have also incorporated the Argentine national football team, the Portuguese national football team and, to get away from football, the collaboration with UFC.

What does this mean for Chiliz?

It means a lot. Inter will also be playing in the Champions League next season, giving the crypto brand unprecedented exposure. The news has also already impacted the price of CHZ, which has been among the best performers in the sector, only to correct on a day that is proving to be quite complex.

We are sticking to our Chiliz forecasts, which are bullish on current prices, which have been affected by the major slump in the sector. Initiatives of this type – that also show a certain commercial strength of the protocol – cannot but do good to its reference token, that is confirmed one of the most interesting for who wants to diversify his own portfolio.