Razer ready to enter the crypto world: all the details 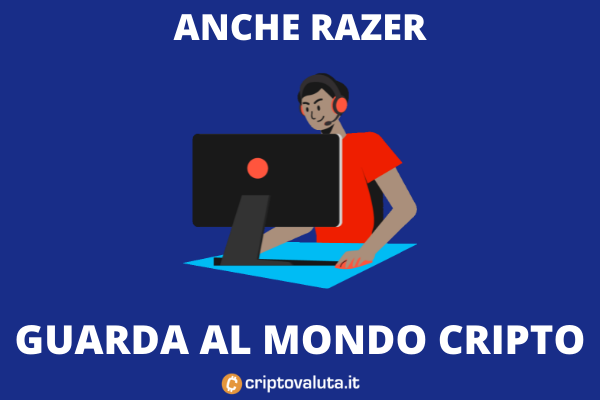 The very important hardware manufacturer and Gamer PC assembler Razer has announced that it may start accepting Bitcoin and other cryptocurrencies.

This was all within a Q&A with investors, with several questions surrounding the very popular gamer company’s upcoming engagement with the cryptosphere. It’s news that’s gone unnoticed but could really change the world of cryptocurrencies and their acceptance for payments in everyday life. Because they are – and we will see in a very short while why – these are the events

that can actually give a real boost to the world of cryptocurrency payments. Razer opens up to the crypto world: “we could become one of the main players”

This is very positive news because it aims to bring together two worlds that have not always gone in love and agreement. In fact, gamers are complaining about the huge price of GPUs due to the interest in this type of hardware by miners

– with a fight that has involved even big companies like NVIDIA.

Good news for the industry? Absolutely – and we could bet on it through eToro (here for a free forever demo account)

, a brokerage that allows you to invest on all major cryptocurrencies, including through CopyPortfolios that replicate the trend of the entire sector. And with the exclusive CopyTrading – which we can use to copy the best or to spy in their portfolios.

“We are carefully considering our entry”

This is in summary the messaggo of the CEO of Razer Tan Min-Liang, who is aware of the complicated relationship between the two worlds, has not yet wanted to unbalance completely – all this while rumors even spoke of a token on the Ethereum

network that would be developed internally by Razer – which, however, has been categorically denied by the executives of the company.

If we were to enter the cryptocurrency space – we would become a major player on a global scale – given our fan base and ecosystem.

These are the words of CEO Tan Min-Liang, which we fully agree with: we’re talking about a company that is by far the most recognizable brand/brand in the universe of gamers

– an audience with a good spending power and that would follow Razer all over the world.

Something that would be, to be clear, extremely more important than the commitment of Tesla – which had only a few months ago decided to accept purchases in cryptocurrency – which was then withdrawn following the now well-known dispute

concerning the cryptocurrency market.tential consumption of Bitcoin and its impact on the environment.

In the case will be an engagement with cryptocurrencies without GPU mining.

And so the thing would exclude, for the moment, both Ethereum and Ethereum Classic – with the others among the best known and most famous that instead – even when using PoW systems, can hardly benefit from GPUs. A rather understandable position on the part of Razer – also given the history between the different sides of cryptomaniacs and gamers, with the latter having to buy GPUs in recent months at a greatly increased price, due to the demand brought to the stars by miners.

It’s also hard to think, at least for the moment, about Bitcoin, as Razer’s leader has reiterated the need to look at cryptocurrencies that are low-powered and, in power, green. Which BTC could be, but not according to the current narrative.

Razer’s entry into the space would change the crypto world

It will seem to many of our readers a misplaced and exaggerated statement – but the impact on public opinion of a group like Razer – that historically we can consider as one of the most appreciated in the industry – should be evaluated anyway.

And also the numbers of the company – if the interest were to be effective – could become important for a sector that is worth a lot, but that could be worth much more in the future. In particular, if interest from groups of this calibre were to materialise.

“Everything goes according to plan”: Charles Hoskinson on Cardano Smart Contracts