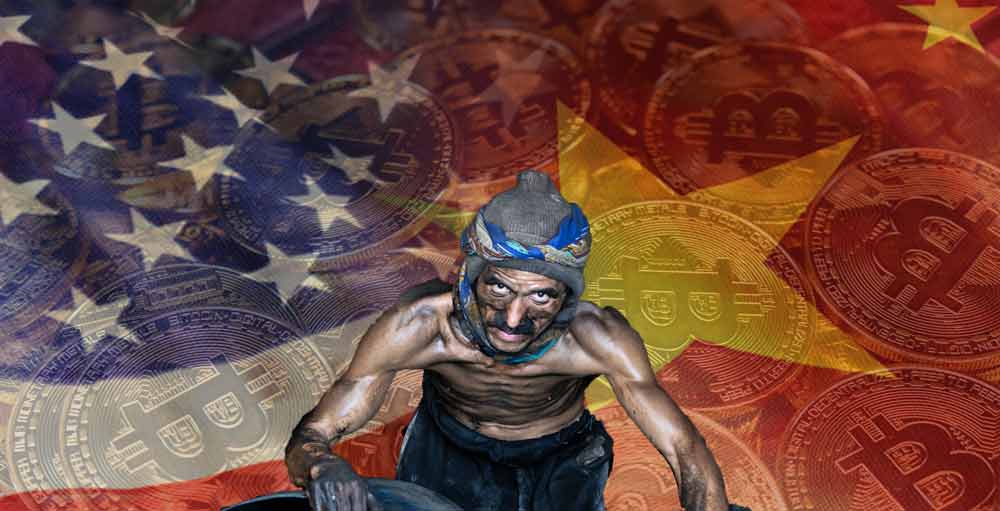 Is mining still a lucrative business? Between the ban on mining facilities in China and the many environmental problems pointed out, doubt is in everyone’s mind. However, the activity, which is at the heart of how the Blockchain works, is still very popular all over the world.

We took a look at the cryptocurrency mining business and in particular Bitcoin (BTC). From China to the US to Iran, what is the state of mining in the world in July 2021?

When China announced a ban on Bitcoin mining in its territory, observers thought it was a bad sign. In reality, a reshuffling of the deck has taken place. The number of companies operating from China was leading the way. They had the majority of the mining power in the world. The big fear was that these companies would have been forced to sell their Bitcoin stocks. And that was to balance out their shortfall. But that massive sale didn’t happen. This suggests that Chinese farms have successfully relocated their facilities.

The Chinese ban has had two consequences for global mining. First, the difficulty of mining has drastically decreased. This difficulty is determined by the number of computers and servers in the world trying to mine at the same time. So when all the Chinese servers stopped, the work became much easier for those who continued.

The second notable effect is the exodus. Mining companies are migrating. In particular to North America, which has become the new global centre for mining.

The exodus of Bitcoin miners

For example, the IBC Group. This UAE company specializes in investment and mining. It recently moved its headquarters to Toronto. Its president Khurram Shroff said, “We believe the Chinese crackdown is a temporary inconvenience. The diversification of the location of mining facilities is great news for the rest of the world.”

Kazakhstan has also picked up much of the mining activity. The country has two advantages for Chinese companies that have had to relocate. It borders the Middle Kingdom, which greatly reduces the logistical costs of moving. And electricity is cheaper. These are two factors that make it an ideal location for these companies.

Companies that specialize in mining and buying Bitcoin have seen their stock prices rise with the Chinese ban. In particular, two of the leading mining companies, Marathon and Riot. These have seen their share prices rise by 143% and 93% respectively following the Chinese government’s announcements. A third Western company, Bitcoin Mining Limited (BTCM) has not yet benefited from this increase and its price is still stagnant at the same level. This difference is due to a slower migration of facilities. BTCM was mainly based in Sichuan province. It is currently preparing a migration to Kazakhstan and Texas.

Another firm, Argo, is currently exploring a listing on the NASDAQ. This would follow an initial listing on the London Stock Exchange in 2018. Meanwhile, the company is building a mining farm in Texas. With a capacity of 200 Megawatts, this would complement its 35 Megawatt Canadian facility.

Gryphon, also a US company has announced that it has picked up equipment from former mining giant Bitmain. They have acquired 7,200 Antminer S19J Pro mining rigs. This purchase is strategic in the current context. Indeed, the company, which manufactures these components, announced to reduce the production of graphics cards for miners. Gryphon is one of the mining centers that is most committed to ecology. A credible commitment, with 100% of their electricity coming from renewable sources.

Renewable energy is at the heart of the debates surrounding bitcoin and mining. WithElon Musk ‘s statements on the subject, but also Bill Gates and prominent media figures, all eyes have turned to the ecological impact of cryptocurrencies. Hydroelectric dams are the object of covetousness, like this facility in Mechanicville, New York. It now makes more money using its electricity to create bitcoin than it did selling it to the national grid.

See also  Cybercrime up 600%: protect yourself at a low price with NordVPN

Also in New York state, a facility is dividing locals. A former natural gas power plant has been converted into a center dedicated to bitcoin mining. But this development is not to the liking of local residents. They blame the facility for increasing the temperature of Seneca Lake. A lake that is part of the great Finger Lake in the north of the state. An impact denied by the CEO of the company, Jeff Kirt. According to him, his plant is operating with all possible legal approvals. And that’s not all: its carbon footprint is close to neutral. The case has been taken by local advocacy groups to the Supreme Court.

Ecological impact is a major concern of the crypto community. Utah-based CleanSpark has recently innovated in this direction. A solution called microgrid. The idea is to aggregate multiple renewable energy sources. Like solar energy, wind, electric batteries or water.

A Wind of Innovation in the Mining Industry

The advantage of microgrid technology is twofold. Firstly, the different sources of green energy are combined in a single electrical production unit. In contrast to a system where the mining farm would have to change its own power supply, the microgrid technology is not a problem.This means that they are able to switch between different grids depending on the origin of the electricity. With microgrid, a single grid supplies their servers. This innovation reduces the carbon and climate impact of the mining activity. But this technology also improves the mining capacity and efficiency of the facility.

Climate considerations are a major issue for the industry. Countries such as Iran have suspended mining activity in the country due to high summer temperatures. Indeed, by overloading the electricity demand of the grid, the mining installations have caused blackouts and failures of the domestic grid.

However, the mining industry, although heavily criticized, is one of the industries that uses the largest mix of green energy. And that’s ahead of business and government. The reason could be simple: people will do anything to mine cryptocurrencies. So any means are good. And green electricity is proving to be a cheap source of energy. Indeed, if a company buys a dam, there is no investment to make beyond maintenance. The same is true for wind turbines.

Cryptocurrency mining is booming. Many companies are now making it possible to invest in this business via the stock market, with listings on the NASDAQ, LSX or S&P 500. Companies that have seen a sharp increase with the Chinese ban. In addition, the ecological aspect is undermined by fake news propagated by both sides. Some do not hesitate to talk about one of the most polluting activities on the planet. The other side responds with technological innovations and efforts to move towards green energy. But also with green washing.

What is certain is that Bitcoin mining is not the over-polluting industry it is described to be. Especially when compared to other global industries, like United Airlines. That American company that just placed an order for 270 new aircraft, the largest order in history. And the aviation industry uses 100% fossil fuels. Moreover, mining is not dead. On the contrary, it is growing faster and faster, and the race for the largest and most profitable facilities has already begun.