How do I punch the NFT directly from the smart contract?

Are you late to the dotdotdots minting? Nothing lost. Just learn the art of minting NFT directly from the smart contract and wait for ETH to break the previous price record. Bon appetit!

Minting from within the original online NFT project can sometimes be cumbersome especially if the site is slow or poorly designed. And then you see others minting their NFTs and ask yourself, “How do I mint a token when others are minting but the site doesn’t work?” The reason for this could be that some people mint NFTs directly from the smart contract. If you don’t know how to do this yet but would like to learn, this tutorial is just right for you.

Dotdotdots, or mint NFT from a smart contract as an obligo

Before I get into the actual tutorial, I would like to draw your attention to one of the latest NFT projects – for good reason. Do not treat this as an off-topic digression. In a moment you will see why.

On the dotdotdots subpage on OpenSea, in the project description, we read:

“Dotdotdots are strange, iconic creatures that live in solidity. They hide as parts in code and are rarely seen naturally by human eyes. They are often referred to as bugs, but their species is unknown.

Dotdotsdots can be minted directly from the contract using the mint function at a price of 0.05 ETH, with a maximum of 5 per trade. There will be 4360 dots for the mint initially, but supply will increase to $10,000 as Ethereum reaches a new price record.”

Dotdotdots was one of those NFT projects that grew kind of out of nowhere: without a website, without Twitter, Discord and all those media that are usually for projects of this kind at least. Currently, the situation has already changed and the community can follow the threads appearing around the project at least here.

At the very beginning, however, the only thing that could be done by someone who wanted to get NFT from the new collection was to mint it for themselves on Ethereum. Currently, the mint option on the smart contract is not active, but – as you read in the description above – with ETH reaching a new ATH, the mint possibility is expected to return to a maximum supply limit of 10,000 units. A glance at the trading volume and selling prices of dotdotdots on openSea shows that it is probably worth preparing for.

It is worth noting that among the part of the community that has so far benefited from minting tokens on native ser via native services of specific projectsIn the past, the vision of beating the dot on the blockchain seemed to be the proverbial “black magic” and many were left with their hand in the night, being able to buy only on the secondary market. There are voices that the “old school” is coming back, and that in the near future, such a “natural” from the point of view of the network way of beating NFT will be used more and more often by users of NFT sympathizers. So let’s learn how to do it!

The first thing you need to do is find the smart contract address. Most NFT projects make it available on their website or Discord server. If the project has already minted an NFT (for example, in a pre-order), you can go to the official collection page on OpenSea and click on any NFT in the collection, then go to “Details” and check the “Contract address”. Here is a visualization of the NFT dotdotdots contract address shown in the “Details” section on OpenSea: 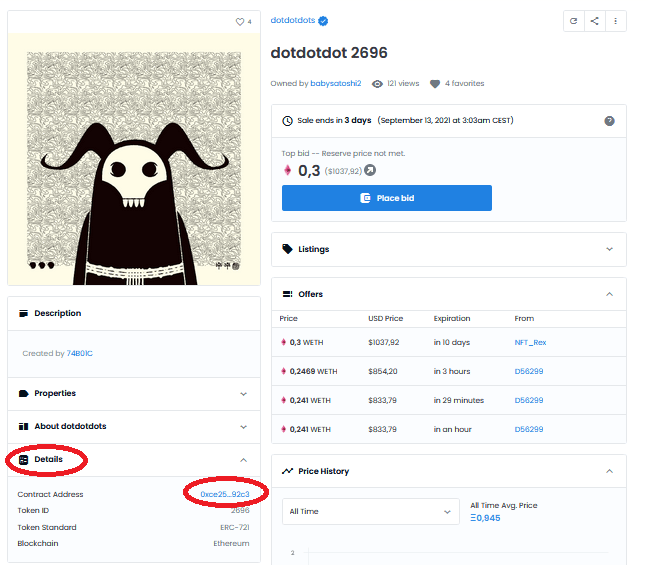 Important! On OpenSea (unfortunately) many projects impersonate new NFT projects that are currently on the air. In order not to become a victim of fraudsters and get a worthless token, it’s worth to pay attention if the project is verified. In OpenSea, the verification of the originality of a project is indicated by the blue check mark which is displayed next to the avatar or the name of the project/collection:

Step 2: Connect to Web3 and interact with the contract

Once you have located the address of the contract and navigated to etherscan, you will see the following view:

Below the banner ad you see a bar of options that relate to the meta data centered around our sample contract. The field we are interested in at the moment is “Contract”. We will use the dotdotdots contract as our example.

NOTE: If you want to use the smart contracts of other projects in this way remember that if the project has not yet been launched or has been sold out, the beat is not working, your transaction will be rejected and the transaction fee will be forfeited. Once again, I stress that at this time, beating dots DOES NOT WORK; we are simply learning how to do it.

Code is, as you might guess, writing the smart contract code. If you’re somewhat familiar with the structure of the code in any programming language, you might want to analyze the code and look for some “flavor” in it. However, you do not need to be able to read the code.

The most important information about the NFT can be found in the “Read contract”:

Expand three piThe first, most interesting for us at the moment, fields: 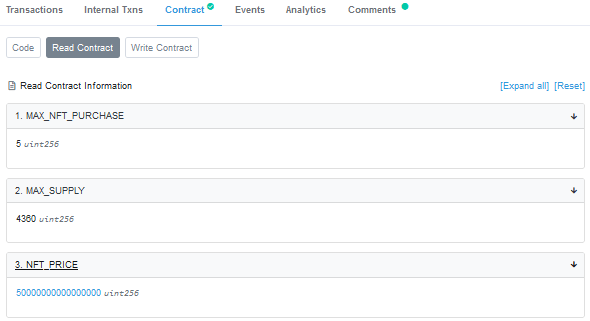 That’s pretty much all you should know before you proceed to mint NFT. Armed with the above data, go to the “Write contract” tab.

Click “Connect to Web3.” Etherescan will call up your MetaMask and ask you to log in. Once logged in, the colour of the “LED” on the button will change from red to green. Then look for a field in the list with the signature “mint” or “buy”. Depending on the purpose of the smart contract this function is sometimes called something else:

In the “mint” field you enter the price per token. If you want to strike exactly 1 NFT you enter 0.05 as stated in the smart contract. In the numberOfTokensMax5 field we would enter how many tokens we want to try to mint (1-5). Note that if you are minting more than 1 NFT, you will need to increase the transaction value in the first field accordingly (e.g. for 2 NFT you would need to enter 0.1).

The last step on the Etherescan side is to click “Write”.

MetaMask will ask you to sign the transaction. In this step, you would need to make sure that you have verified the current price for gas.

That’s it. Assuming that the NFT dotdotdots minting was currently active (it IS NOT at the time of this writing), you would have just initiated the minting of your token.

PS. If you don’t have a wallet on MetaMask, don’t know how to set it up and how to use it, read this guide:

It is worth noting that minting NFT on Ethereum is currently quite a tough nut to crack. All because of, of course, astronomical levels of transaction fees (gas), which can not only effectively discourage the minting of tokens on this network, but also, if you set the gas fee too low, can lead to the “suspension” of your tran

sactions on the blockchain. Nothing much – someone could say, but the transaction

in the status (pending) on MetaMask can be annoying, and even, according to some sources – leaving it in such a state can effectively hinder the future processing of transactions using this tool.

It is worth noting that along with the development of the NFT sector, there are more and more new marketplaces that allow trading tokens minted using the recently popular Solana or Tezos (this is also a topic for a separate tutorial – let us know in the comments if you would like to read such a tutorial on Bithub)

, take a look at the following tutorial:

Interactive Brokers offers crypto-currency trading to its US customers