Fidelity: +70% for crypto and points to Ethereum and DeFi 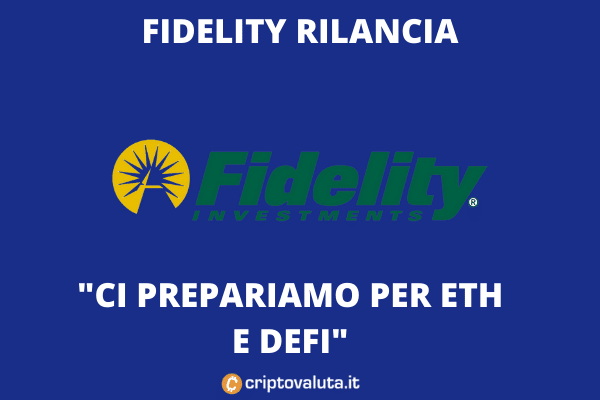 Fidelity Digital Assets – which is one of the world’s leading investment intermediaries – is preparing to expand its dedicated cryptocurrency division by 70%. This is according to what was reported by Bloomberg a few hours ago.

A move that does not come as a surprise, because it’s been a long time that insiders talk about a more substantial entry of Fidelity in the ecosphere of cryptocurrency investments. And the widening has not been long in coming, with all the big and very big groups taking advantage of this period of flat calm in the market to prepare for the next bull run.

Fidelity relaunches on crypto – and looks at DeFi and Ethereum

And there have been very interesting statements from the top management of Fidelity on the future of the cryptocurrency world, which will be of great interest both for those who have already invested, and for those who instead want to prepare to enter the crypto world today

Ethereum top of priority and +70% investment

. However, part of the expansion of its division dedicated to cryptocurrencies will be allocated to

, for which the group seems to see a very interesting future.

We are seeing more interest in Ethereum [than in Bitcoin, Ed], and so we decided to anticipate this future demand with an increase in our capacity in the crypto space.

That’s how Jessop expressed himself, who prior to this fulminating

statement on Ethereum had already expressed himself on the cryptocurrency market in general.

In the last year we’ve seen a major jump in this space, with interest in Bitcoin rising at the start of the pandemic and dragging the whole sector along.

An idyllic situation for companies that in a short time have managed to set up, as did Fidelity, an entire division dedicated to cryptocurrencies for its customers. With the stated goal of expanding trading operations for its customers – and bringing them to 24 hours a day – rather unusual hours for those accustomed to traditional markets, which as is known work during office hours. All this within an increase in resources and professionalism of 70% – almost a doubling for an investment company that was already among the most organized in the crypto sector.

Eye also to the world of decentralized finance

But it does not stop here the esp

Fidelity’s expansion into the cryptocurrency market. In fact, the group has let it be known that it is also closely following the world of decentralized finance, a niche that is expanding rapidly and is already worth significant amounts in terms of market capitalization.

Bitcoin has been the entry point for many companies in the cryptocurrency market. Now it is time to open a window to new opportunities.

With a commitment that could trigger the classic cascade effect that pushes even those who remained behind to the so-called FOMO, that Fear of missing out that was responsible in large part of the great race of the sector in the last 8-12 months.

Great news for the sector as a whole

The latter two are relatively new worlds for the institutional investor sector, but could grow significantly as soon as the market breaks its deadlock – which has been going on since the huge correction in mid-May. These are positive and encouraging signs that dispel the fear that has gripped the sector for several weeks. All it will take is a spark – which could be this one from Fidelity – to restart at the levels we are used to.

See also  The next stage of cryptocurrency adoption | BitHub.pl

Germany opens its arms wide to Bitcoin and cryptos… and France?

Bitcoin’s overnight explosion to close in on $40,000