Ethereum: what will change with London upgrade? Full analysis 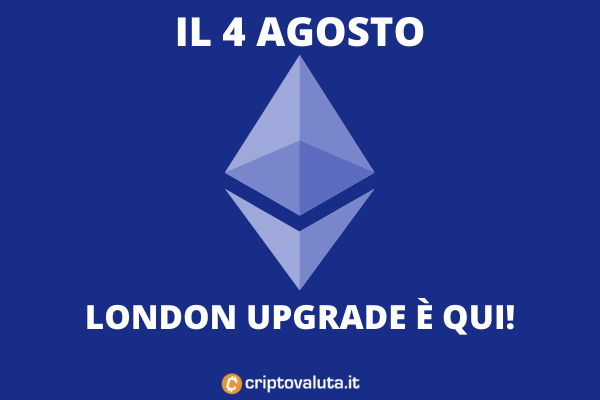 It’s finally here. We are less than a month away from the highly anticipated London Upgrade,

which will eventually revolutionize the functioning of the entire Ethereum blockchain, within a path that should bring the entire system towards the transition to version 2.0.

Many are talking about it, but very few have bothered to offer their readers a concrete analysis of what will happen after the introduction of this blockchain updates. That’s why we decided to do it here on Criptovaluta.it, allowing even the less technical

Many new features, but there are 2 that can change the history of Ethereum forever

We anticipate that the new systems introduced could have a major and bullish effect on the price of Ethereum, since deflationary policies will be introduced that will make ETH a much scarcer token

, intermediary that offers the possibility to invest on all major cryptocurrencies, with exclusive services such as CopyTrading (with a 1-click copy of the best ones and to spy on their positions in the market) and CopyPortfolios, for those who prefer to invest in balanced baskets, with different crypto assets.

London Upgrade: what it is and what it will introduce

The London Upgrade is a hard fork of Ethereum‘s blockchain, which is already running on the project’s testnets and is expected to make its entrance

on the main network next August 4, 2021, at block 12,965,000. With current block production timelines, this should happen between 2pm and 6pm Italian time.

This is one of the most anticipated updates in Ethereum’s history, as it will introduce a new fee system for the network – not without some kind of resistance from those who mine

, professionally or even amateurishly.

Although London actually contains several new features, the most talked about is definitely EIP-1559, which will introduce a new way to calculate and manage fees. For each transaction to be enrolled on the blockchain, the fees will be divided into two parts.

A base fee that will be destroyed by the network – with one part going to the miners instead. This burn

process will, over time, make Ethereum increasingly scarce, thus having a completely deflationary operation. Conversely, the miners will no longer be able to earn a portion than the slice they earn today. And hence, at least in recent weeks, the first grumblings. Because for many activities, even well-articulated, mining Ethereum could become much less profitable.

The base fee that will be burned will change every block, depending on the overall congestion level of the network. And the fees will go up as the network congestion increases. Again trying to streamline the whole operation of the Ethereum blockchain.

Which is the proposal that will operate with the difficulty time bomb – that is a mechanism within Ethereum that with time makes the solution of the blocks much more difficult. It will be delayed, according to this EIP, to December 2021, while a previous proposal aimed instead at the first half of 2022.

Is this good news for Ethereum investors?

On paper yes, because it will start a process of gradual destruction of ETH that could greatly reduce the supply compared to demand, with all that follows in terms of growth in value for the project.

It is not said, however, as several analysts correctly point out that this new system will succeed in making the network more scalable. On the contrary, from the data that have been collected on the testnets – which are enormously less congested than the main network – there doesn’t seem to be anything to suggest an improvement in the general conditions of the queue.

How to move now as investors?

The gradual transition to Ethereum 2.0 will be the most momentous change to the history of the crypto industry’s second largest project by capitalization. We could enter the market today and go invest in a token that has a relatively low price, then take advantage of both the anti-inflationary maneuvers and the greater scalability we will have once Ethereum 2.0 becomes a reality.

Show off your bitcoins! US Treasury wants to know everything about crypto holders around the world

If not Bitcoin, Elon Musk blows up 2 new cryptocurrencies