DeFi, NFT, stablecoins on Bitcoin | Send this article to all the altcoiners and heiners….

Are you aware of the opportunities that bitcoin offers to users and developers? Do you know that there is nothing stopping you from building smart contract solutions on this network?

Centralized systems create mismatched incentives and inefficiencies with slow growth and innovation, while enriching those in power and skewing the rest of us. Distributed systems provide better outcomes, more equitable interactions, and more robust systems.”

Bitcoin is an unstoppable technology

Here are features of bitcoin that no other project has:

A constant supply that is not dependent on demand. Shortage of bitcoin is not a problem when making payments. 1 bitcoin is exactly 100,000,000 satoshi. One satoshi

Monetary policy enforced by the distributed network: to make the network the most secure network in the world. Bitcoin’s blockchain is relatively small. Anyone can create a node for the blockchain for about $200 and thus secure the network. You can see at https://bitnodes.io/ that there are currently just over 11,000 nodes on Bitcoin that are distributed globally. For comparison – the Internet has about 340 commercial nodes.

rate is 1.86%, which approaches 0% over time. Bitcoin’s current stock to flow is 57, making it one of the strongest assets in the world.

Open, global, permissionless: it works the same everywhere. Bitcoin has no CEO or company standing over it.

Technological advancement: by using Bitcoin you can instantly reach the same level of technol

ogical and financial infrastructure like everyone else. Bitcoin’s blockchain is the first layer. Work on the second and third is still ongoing. There will also be a major new software update with new features in late 2021. Bitcoin cannot be duplicated. Bitcoin has the largest market capitalization, high liquidity/volume, most well-known brand, network effects, many investments, and much more.

Power consumption: Bitcoin is hard to mineand is the only PoW network in the world that distributes trust between computing power. Over time, hashrate increases. The energy required to mine Bitcoin is not a drawback, but rather a feature. This makes bitcoin the most secure network in the world and it cannot be attacked. The current ban on bitcoin digging in China is the biggest attack on the bitcoin network so far. Hashrate went down, but bitcoin was not destroyed or manipulated. Everything went as it should have.

“Bitcoin enables untrusted individuals to reach a distributed consensus by solving the problem of Byzantine generals with proof of work. It is immune to inflation, seizure, and censorship.” – @Wiz

“Bitcoin is a system of software rules, not rulers. It’s truly decentralized because Satoshi took a step back, giving us the community and value of Bitcoin first, and tucked his ego in the back. You know that’s not true of other cryptocurrencies.” – Alyse Killeen

Bitcoin is a monetary software on which you can build as much as you want.

“Bitcoin alone cannot scale so that every financial transaction in the world is broadcast to everyone and incorporated into the blockchain. There needs to be a second tier of payment systems that are lighter and more efficient.” – Hal Finney, 2010

See also  Man who trashed his hard drive with 7,500 bitcoins tries new plan to get it back

Bitcoin’s block size is not very small. It’s just not optimized for securing multiple transactions. Bitcoins core layer (blockchain base layer/layer one) is perfectly optimized as a store of value.

This is the reason why bitcoin is migrating to a multi-valued ecosystem. Many of the changes are already done at layer two or three. Another way to perform transactions on the Bitcoin network is to use the Lightning Network. Lightning Network is a second layer technology built on top of Bitcoin (first layer) and everything is open-source. You can think of it as a cebuli. It has different layers that layer on top of each other, but are ultimately secured by a base layer.

“With Bitcoin, it is possible to take ownership stakes in the entire Internet of value.” – Croesus

Bitcoin already has the best payment and trading ecosystem:

But what about smart contracts, decentralized finance or other solutions?

“Bitcoin has always had the ability to create smart contracts. Bitcoin is programmable money, so you could always require multiple signatures, for example, in a transaction, or require a certain amount of time or a certain date to pass before initiating a transaction. In a Bitcoin development environment, the most important thing is that the environment be secure and stable. The advantage of this is that Bitcoin has never experienced a hack at the base protocol level. We’ve also seen very limited downtime. And of course this is critical when we’re talking about a financial technology that represents billions of dollars in value.” – Alyse Killeen

“LN is a network that achieves things like identity on the network; it sets the standard for sending payments; the standard for receiving payments; the standard for trust between two peers; the standard for final settlement and what finality looks like. And when you think about it holistically and you think, “How do other monetary networks work?”, Visa does the same thing on its network, but how do I know that this is my Visa card and this is Peter’s Visa card? There are some numbers on it, right; and you have a specific account; I also know how I send and receive transactions; but how is the debiting of the card done, how is the settlement done? We think bitcoin is not only better, cheaper, faster and more global than any other monetary network, but most importantly, it’s open. And when it’s open, open networks, excluding money, just in general, always win. Open networks have defined economies of scale and network effects that are extremely powerful. So, if you think a competitor is going to enter the network know that in an open network every new participant is additive, it actually strengthens the network. So competition is actually “good for your business.” – Jack Mallers

“The ability to perform millions to billions of transactions per second across the network. The potential offsets legacy payments by many orders of magnitude.” – https://lightning.network/

The Lightning Network pays a fraction of a cent in transaction fees and can send money in real time.

Jack Dorsey, CEO of Square and Twitter, said: “That’s why I’m committed to LN, because it will be used by more and more people. I believe bitcoin is an amazing asset, but the internet needs a native currency. We need to be able to transact with itAll over the world. The only reason Square is interested in Bitcoin is because of this.”

There are already many apps that use Bitcoin and the Lightning network: Strike, Bluewallet, Breez, Muun, and many more! If you think Lightning is about the future, you’re wrong. Everything is happening here and now.

What is possible in the future is amazing.

You block a bunch of bitcoin in the base layer, using multi-sig (which in itself is already a smart contract). Once a bitcoin is blocked, you can issue new “tokens” (they are still bitcoins) on different layers and do whatever you want with them. Bitcoin is like a black hole and every major financial service gets sucked into it.

See also  Bitcoin mining - What is Iran playing at?

“Blockchain technology itself is a synchronized, securely timestamped database that can store ownership information, and that means ownership of anything.” – Andreas M. Antonopoulos

Rsk.co: “Open Finance. Reliable and transparent finance on bitcoin. Bitcoin is DeFi’s biggest opportunity and is fully enabled on RSK, the world’s most secure smart contract platform. Bitcoin users can now borrow, lend, trade and make money with their Bitcoin. The future of finance is decentralized.”

Bisq: “Bisq is a peer-to-peer trading network, not a centralized service. It’s software you run on your own hardware, not a website run by someone else. It’s open-source and community-based. Bisq is code, not a company. It is an open-source project organized as <a href=”https://bithub.pl/artykuly/dao-czyli-programowalne-spolecznosci-co-powinienes-o-nich-wiedziec/” target=”_blank” rel=”noopener”>decentralized autonomous organization (DAO) built on Bitcoin”.

Sovryn: “Your keys, your control. A decentralized bitcoin trading platform and lending ecosystem.”

Digital ID with ION from Microsoft: “ION (Identity Overlay Network) is moving into the bitcoin core network. We are thrilled to see ION move into Bitcoin’s core network as part of its public beta. ION is an open, public, permission-less tier-2 network built on open source code that anyone can browse, run and create. From its inception, ION was developed as a decentralized network designed to operate independently of centralized sites and trusted intermediaries, including Microsoft. ION does not rely on special utility tokens, trusted validation nodes, or additional consensus mechanisms; the deterministic chronological progression of Bitcoin blocks is the only consensus it requires. The fundamental promise of DID technology is to give all individuals and entities ownership and control over their identities […] As an open, public network; ION does not rely on any privileged validators or trusted authorities – anyone can run a node to participate in the network.”

Lightning Labs: “Building a faster, cheaper, global second tier bitcoin. At Lightning Labs, we develop the software that powers the Lightning Network. Our secure and scalable open source Lightning systems enable users to send and receive money more efficiently than ever before. We also offer a range of verifiable financial services based on Lightning technology. We combine the world of open source software with the next generation of bitcoin financial software.”

<a href=”https://elementsproject.org/” target=”_blank” rel=”noopener”>Elementssproject: “ Elements is an open source blockchain platform with sidechain support, providing access to advanced features developed by community members. Built on and extending the bitcoin code base, it allows developers familiar with the bitcoin API to quickly and cost-effectively create working blockchains and test verification projects.”

Spacechain: “A method for creating untrusted blockchains that improve the Bitcoin ecosystem by explicitly not competing as a store of value.”

Sphinx chat: “Chat and pay via Lightning, each user gets a dedicated server.”

Lolli: “Lolli gives you free bitcoins or cash when you shop at over 1,000 top stores.”

swanbitcoin: “Swan is the best way to accumulate BTC with automatic, recurring and instant purchases.”

layer1: “Building Bitcoin Batteries. Layer1 Technologies Inc. is building under the keycz, fully integrated data centers for bitcoin mining that increase the profitability of energy assets and improve the reliability of electric grids.” 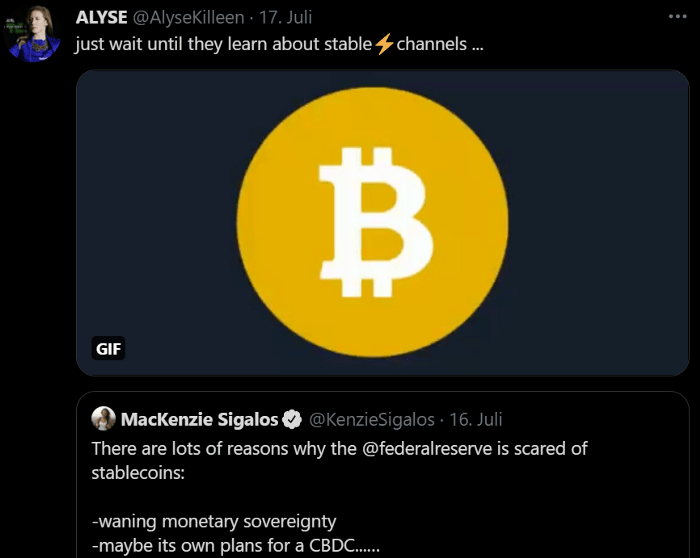 The development of bitcoin applications is also taking place for large institutions. NYDIG, for example, is a subsidiary of bitcoin Stone Ridge, a $10 billion alternative asset manager. “We are united in our mission to safely unlock the power of Bitcoin through technology and financial services that enable forward-thinking companies and investors to access this asset class.”

All of this works without the two major updates to Taproot and Schnorr.

Each new layer built on top of Bitcoin makes the first layer more valuable and improves network effects. It’s already pointless to chase other projects because Bitcoin is technically superior and you can build anything on top of it.

The main layer in Bitcoin is now optimized for security and scarcity (sound money). Everything can now be built on it. All other projects don’t care about the underlying infrastructure. Only Bitcoin has optimized the underlying infrastructure. There will only be one Bitcoin network, just as there is only one Internet. Some argue (see link) that altcoins will become another new feature to be added to the world’s most secure Bitcoin blockchain network. It is this layered approach that makes Bitcoin so incredibly valuable and gives it entirely new use cases. Bitcoin can do what other projects want to do, but in a better, more scalable and robust way.

“Bitcoin is not evolving?” Send this article to all altcoiners and hecklers.

Bitcoin surpasses USD $41,400! Its best price since May