Who is Digitalbits, the new technical sponsor of AS Roma? 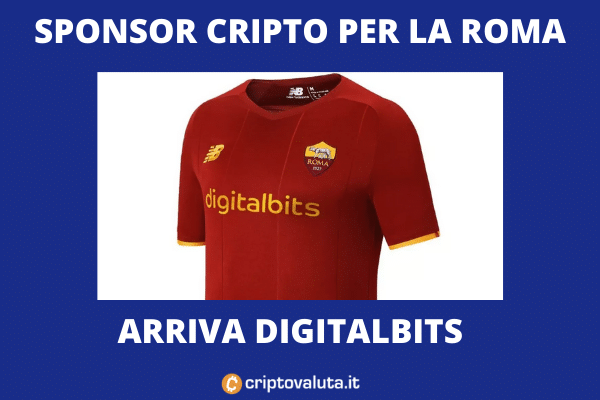 The official announcement has now arrived, confirming what had been leaked through the photos of the Australian website UltraFootball. Roma’s next sponsor will be Digitalbits, a company that – as we’ll see in our in-depth analysis – is organic to the world of cryptocurrency

This is shocking news for many, but it follows a trend that has already seen several large groups linked to the world of cryptocurrencies (and intermediation) settle in the world of professional sports – such as Crypto.com, which sponsored the last Coppa Italia final

. The official announcement is expected to come soon With the

arrival of Digitalbits on the shirts of Roma, one of the most famous clubs in Italy, the music changes – because millions of fans of the capital’s team will be immediately exposed to the world of cryptocurrency – even among those who would have had difficulty in coming into contact with this very special niche

official announcement has also arrived The official announcement of the club has also arrived, confirming what we had seen with the photos attached to this article, which came from the Australian store UltraFootball, one of the most important in the country, which then promptly removed the ad, clearly suggesting a mistake (and the overcoming of the classic embargo for this type of news)

Digitalbits is a company that deals with infrastructure on Blockchain and manages an advanced and complex ecosystem, with several projects already under its belt. From Zytara, a digital banking platform, able to manage also NFT

, to the wallet that is already available for iPhone and Android devices.

Interesting, from the project, also Stably, that offers infrastructure to corporate

clients for the creation of stablecoin and NFTY Labs, a 360° solution for the world of non-fungible tokens.

We had already seen the Digitalbits symbol on the advertising panels during the press conference for the presentation of José Mourinho, who will be the next coach of the capital team for the upcoming season. It comes, with the shirt, the confirmation of a much more important commitment of this brand

. It will in fact be on display on the front of the official game jersey, which will be accompanied by Hyundai, relegated however to the back of the uniform. <p>And the confirmation of Roma’s official social accounts leaves no room for denial, in a week that has seen all the major teams in the world present their uniforms for next season. An event that keeps fans glued to their screens, as well as, in this case, cryptocurrency enthusiasts, with some other big company that could make a splash and arrive on the uniforms of such emblazoned clubs.

In fact, Roma is by far the most active team in the blockchain world, at least among Italian football clubs. The team had ASR Token-holding fans vote on the livery of the bus that will accompany the team home and away next year. As well as being one of the most active on the Socios.com platform, which is headed by Chiliz.

A platform that collectively offers access to over 50 top tier teams to the management via blockchain of fan loyalty programs. With Roma leading the Serie A, proving, if there was any need, as one of the teams with the most modern marketing management.

The presence of Digitalbits among Roma’s official sponsors had sent the price of the $XDB token soaring – and allowed, on a bad day for the whole sector, a good price recovery today as well. This is a sign that certain types of sponsorship pay off, especially when they involve such important teams with such a large following.

DeFi, NFT, stablecoins on Bitcoin | Send this article to all the altcoiners and heiners….

Coinbase allowed to buy back half a billion dollars in cryptocurrencies: the announcement that shakes things up