The price of bitcoin is at $46,223 on Coinbase up 1.75% at the time of writing. The leading crypto has already risen more than 50% from its July low. But no one knows exactly how far it could go. What can we expect from Bitcoin’s price by the end of the year? 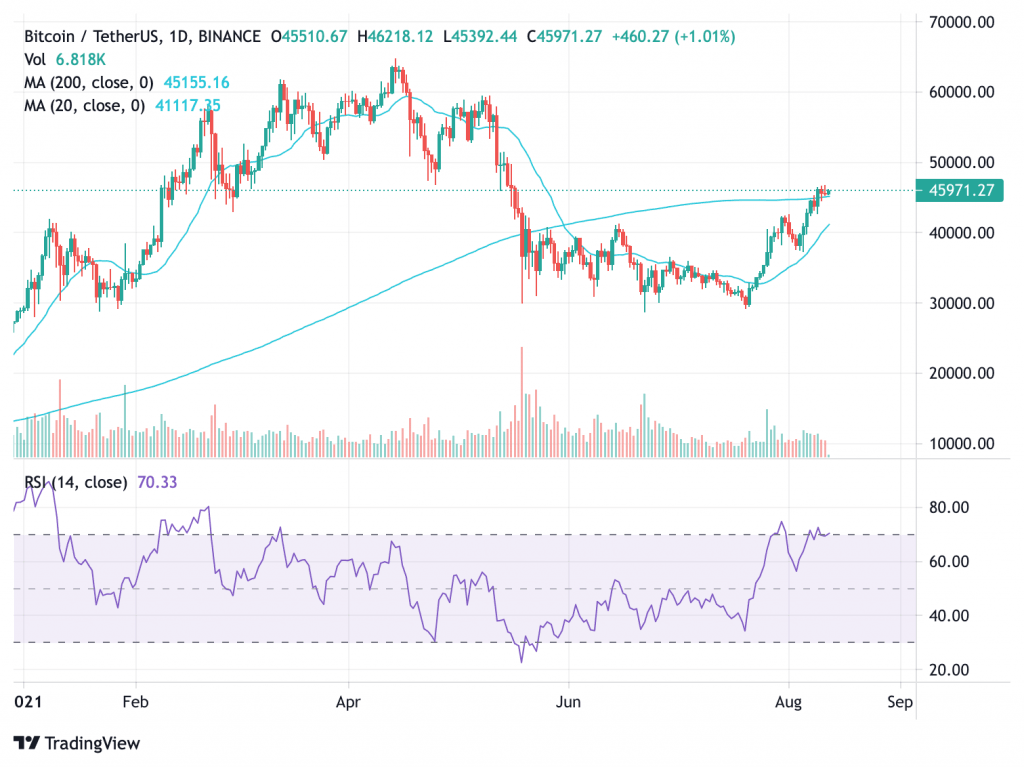 After avoiding the correction below $45,000, the bitcoin price is now setting the $50K and $55K resistance lines. Before reaching this technical bar, bitcoin needs to consolidate above $48K. This threshold is deemed by Van de Poppe to be a decisive point for whether bitcoin would actually manage to retest its highs. In case of weakness above the $48K levels, the probability of the crypto king crashing into the $30,000-39,000 area is very high.

Given the On-Chain bullish factors, it shouldn’t take too long for bitcoin to break through the $50K resistance line. The technical analysis metrics also argue in favor of building the bullish move. The RSI is in the runaway zone with a value of 70.12. The current bitcoin price is trading above the 200-day moving average ($46,156) but also the 20-day moving average ($41,125).

The 80,000 bitcoin hypothesis stems from research by a crypto expert named Nunya Bizniz who found that whenever bitcoin makes 10 consecutive days of growth without any correction, its price tends to double in the next 30 to 60 days after that. At the end of July, bitcoin had such a run so the expert estimates that its price will double by the end of September to $80,000.

It is considered a little too optimistic but it is not at all impossible as bitcoin has already proved to us in the past that it can gain nearly $12,000 in the space of a trading session. Indeed, if the first crypto wants to break through $80,000, it needs to repeat that day in February. It might as well break the $50K and $55K resistances quickly.

Since bitcoin’s first ATH, speculation of a six-figure bitcoin by the end of the year has spread widely in the market. While the recent crypto crash has reignited the bears but with bitcoin’s recent rides, bulls are pretty optimistic for a bitcoin above $100,000.

They are several experts who believe in a bitcoin above $100K. The most famous of them, McGlone, Chex Blo Analyst.omberg Intelligence wrote this:

Bitcoin appears to have built a base around $30,000 that approximates $4,000 in early 2019, and we see performance parallels that could put the benchmark crypto back on track towards $100,000.