While cryptos are on the ropes, Mike Tyon is hesitant to buy Bitcoin or Ethereum! Check out Mike Tyson’s tweet and the many responses that followed!

Mike Tyson asks his fans what they prefer between Bitcoin and Ethereum!

On Saturday, July 17, 2021, Mike Tyson tweeted to his 2.5 million fans, “Which do you prefer, Bitcoin or Ethereum?” This is not the first time “Iron Mike” has shown interest in cryptos.

Recently, the boxing champ partnered with an NFT studio, 1ofone, for example. His first NFT collection is expected to be released in August. The collection will look back at “iconic” moments in his career.

“The more I learn about NFTs, the more I look forward to being part of the crypto/tech community. (…) This is the future and I chose to partner with 1ofone to help me navigate the NFT community with something truly innovative and creative that tells a story about who I am.” Mike Tyson

Unsurprisingly, his question on Twitter drew many responses! For example, rapper Busta Rhymes responded, “Mike, I’m with you. I just spent the last 30 minutes reading the comments”. Another response that didn’t go unnoticed came from Michael Saylor. CEO of Microstrategy, known for investing heavily in Bitcoin, Michael Saylor logically takes a stand for Bitcoin!

“Mike, I’ve spent over a thousand hours thinking about this issue and I’ve chosen Bitcoin. So far, I’ve bought $2.9 billion in Bitcoin because I think it’s the future of electronic property.” Michael Saylor, CEO of Microstrategy

Jack Dorsey, CEO of Twitter, was also keen to take part in the discussion. While his response was sobering, it was nonetheless decisive. He simply responded by sending a link to hellobitco.in. This is a site that helps you learn the basics of Bitcoin. 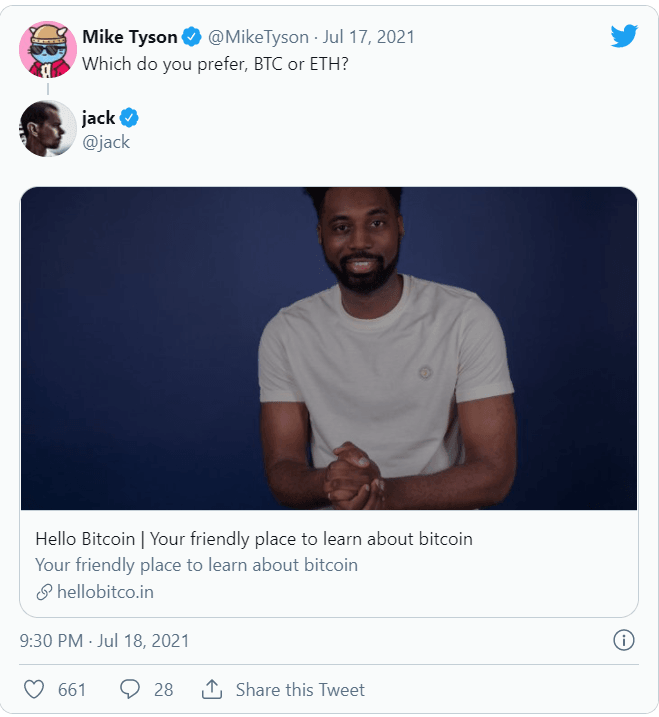 Finally, the Baby Doge enthusiasts invited themselves to the debate! The official Twitter account of the Baby Doge Coin said: “Mike, let’s talk about the Baby Doge”. A bit off topic as the other guy would say…

Enjin Coin brings its NFTs to the United Nations!

Cardano exceeds 72% in staking, all ok for AlonzoWhite

Crypto strategists are betting big on this new corner