The bitcoin price regressed 1.68% in yesterday’s session but avoids the trap of a correction. At the time of writing this article, the bitcoin price is back above $46,000 and is up 3.55%. More fear than harm, the bullish move is consolidating better and better. From now on, crossing the $50K and $55K resistance lines is more than achievable. 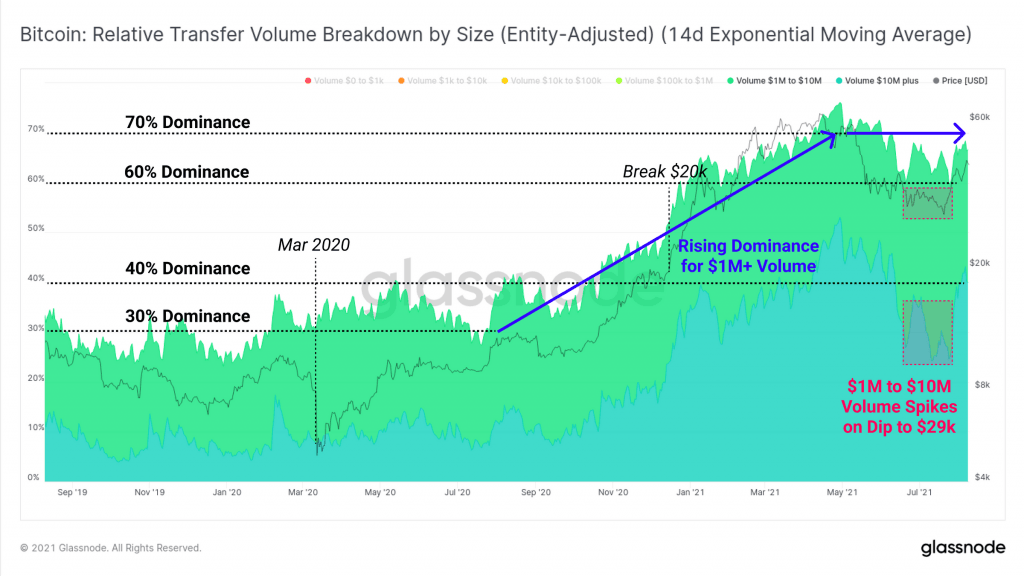 Evolution of the dominance of transactions of $1 million and above. Source: Glassnode

Even during the bear market period, bitcoin’s dominance did not recede. In fact, it followed the opposite movement to the crypto’s price trend. Glassnode reveals in its report:

‘When the market dropped to the $29,000 floor in late July, the $1-10 million trade group spiked sharply, increasing its dominance by 20%… These larger trades are more likely to be accumulators than sellers, which is again quite constructive for the price.

This accumulation trend is confirmed by Santiment. The crypto analysis firm reported in a tweet:

Addresses of #Bitcoin millionaires holding between $100 and $10,000BTC are showing no signs of taking profits on this rise we’ve seen over the past two weeks. These holders hold a total of $9.23 millionBTC, which is their #AllTimeHigh from July 28.

It’s clear that bitcoin is headed straight for the $48,000 resistance. For crypto analyst, Michaël Van de Poppe, this line of resistance is an important point to see if the could test its highs again. In one of his articles on Cointelegraph, he wrote:

The market is approaching a substantial resistance area, as a break above $48K would indicate a bullish continuation and a potential test of all-time highs.

The authorur goes on to point out that if bitcoin fails to surpass $48,000, the risk of a correction below $40,000 is imminent.

Therefore, if the market cannot surpass $48,000 in the coming weeks, the level to watch for support and ultimately the critical level to sustain this momentum is around $37,500.

Dozens of companies launch e-CNY products and services in China